Interview of H.E. Mr. Andranik Hovhannisyan, Permanent Representative of the Republic of Armenia to the United Nations and other international organizations to UN Library&Archives’ "Next Page" Podcast 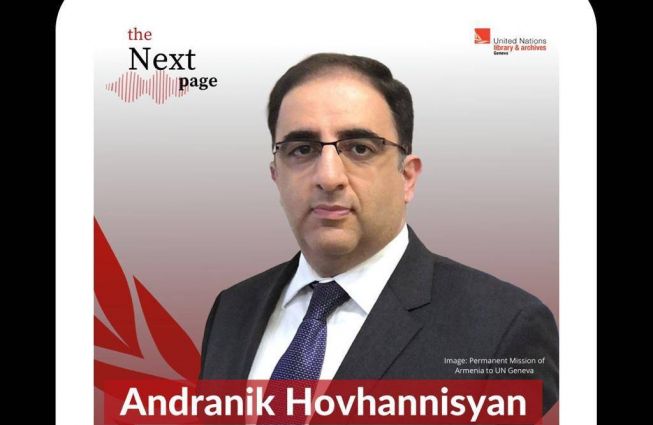 On April 14, the UN Library and Archives Geneva published the interview of Ambassador Andranik Hovhannisyan, the Permanent Representative of the Republic of Armenia to the United Nations and other international organizations, in its "Next Page" Podcast. The Ambassador was interviewed by Mr. Francesco Pisano, Director of the UN Library and Archives in Geneva. The "Next Page" is a series of Podcasts in which the interlocutors exchange views on multilateral diplomacy, the challenges it faces and opportunities it presents in a present-day dynamic and ever-changing world.

During the Podcast, Ambassador A. Hovhannisyan discussed several significant historical events that contributed to the inception of multilateral diplomacy, from the Concert of Europe in 1800s up to the present day. He addressed modern international relations and the role that multilateral diplomacy plays.

As this year marks the 30th anniversary of Armenia's membership to the UN, Ambassador Hovhannisyan referred to Armenia's cooperation within the framework of the United Nations. He noted that since its membership Armenia has strived to contribute to the international efforts by being actively engaged in different UN bodies and committees, chairing and working in various bureaus and boards, as well as participating in peacekeeping missions.

Hovhannisyan presented the centuries-old history of the Armenian nation and highlighted its fundamental milestones. He drew some parallels between the events of global significance in multilateral diplomacy and their impact on Armenia. A. Hovhannisyan dwelled upon the historical, political and legal basis of the Nagorno-Karabakh conflict. He also addressed the Armenian Genocide and the formation of the Armenian Diaspora.

The podcast was recorded in December 2021. It is available at the following link: https://unitednationslibrarygeneva.podbean.com/e/ambassador-andranik-hovhannisyan-on-armenia-the-un-and-multilateralism/?fbclid=IwAR0KePQkDpKoh-oazva39S8MNBXhtoJhTIH6WUtJeNU3J3PolehvzTc0_3M