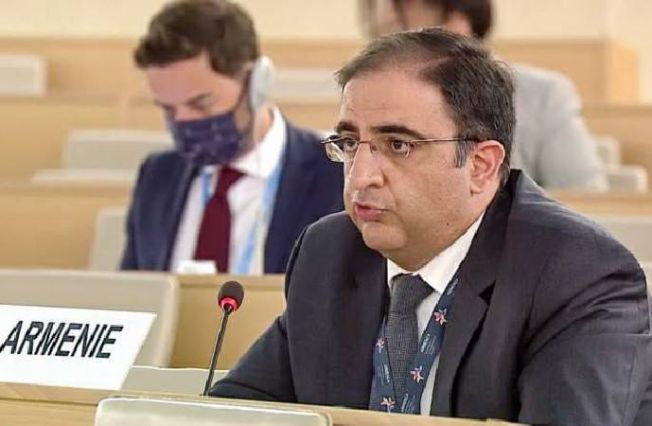 GENERAL DEBATE UNDER AGENDA ITEM 8: FOLLOW-UP AND IMPLEMENTATION OF THE VIENNA DECLARATION AND PROGRAMME OF ACTION

I have the honor to speak on behalf of a cross-regional group of States and my own country, Armenia. The full list of the co-sponsors will be posted on Extranet.

The settlement of disputes by peaceful means and refraining from the threat or use of force are among the basic principles enshrined in the UN Charter.

We strongly condemn gross violations and abuses of human rights and serious violations of international humanitarian law during armed conflicts and urge States to hold accountable the perpetrators of such crimes.

We recall that in accordance with international law it is the obligation of States to investigate and prosecute certain gross human rights violations and abuses. Those crimes must be prosecuted independently of where they have been committed and regardless of the nationality of the offenders, victims and survivors.

We recall that the World Conference on Human Rights expressed its deep concern about violations of human rights during armed conflicts, affecting the civilian population, especially women, children, the elderly and the disabled. We, therefore, reiterate the call upon States and all parties to armed conflicts to respect international law, including humanitarian law, as well as human rights.

We are mindful that the unlawful use of force is often preceded or accompanied by hate speech, large-scale propaganda of war, statements by political leaders and public figures that express support for the affirmation of superiority of a race or an ethnic group, disseminating hostility and prejudice against ethnic, religious or racial groups, or condone or justify violence against them.

We recall that the Vienna Declaration and Programme of Action recognizes that gross violations of human rights, including in armed conflicts, are among multiple and complex factors leading to displacement of people.

It further reaffirms the right of the victims to be assisted by humanitarian organizations, as set forth in the Geneva Conventions of 1949 and other relevant instruments of international humanitarian law, and calls for the safe and timely access for such assistance.

In this regard we reiterate that prisoners of war and internees must be treated in accordance with international humanitarian law and must be released and repatriated without delay after the cessation of active hostilities. Their repatriation is necessary, inter alia, for creation of an environment of trust and establishment of lasting peace and stability. The hostage taking, prolonged detention of prisoners and internees for bargaining purposes is prohibited under international humanitarian law. Likewise, we encourage to implement effective legislative, administrative, judicial or other measures to prevent, terminate and punish acts of enforced disappearance.

We call upon the UN’s appropriate bodies to assume a more active role in the promotion and protection of human rights in ensuring full respect for international humanitarian law and international human rights law in all situations of armed conflict, in accordance with the purposes and principles of the Charter of the United Nations.

We call upon the experts of the UN treaty bodies as well as the special procedure mandate holders of the Human Rights Council, to focus on, report and promptly address the violations committed in war and post-war situations.