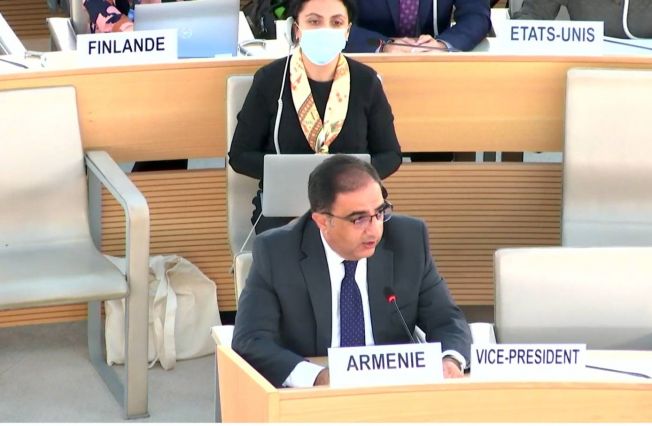 Today is the Independence Day of the Republic of Armenia. Our commitment to independence, sovereignty and democracy is unwavering. We don’t take these values for granted, we have to constantly and persistently struggle for upholding them even today, as we celebrate our National Day.

The unprovoked and unjustified aggression of Azerbaijan against the sovereignty and territorial integrity of Armenia is a blatant breach of the UN Charter. For over two days last week 36 Armenian peaceful towns and villages were under attack of Azerbaijan. There have been numerous casualties, among them three civilians, and several thousand people internally displaced. At least two servicemen were tortured and killed in captivity. We know this since they were seen on videos disseminated on social networks while they still had been alive under the Azerbaijani detention. The most shocking and gruesome videos depict brutal humiliation, torture and mutilation of the Armenian servicewomen. There are a number of missing persons, including two civilians. Serious damage was inflicted upon the civilian infrastructure. These are the reflections of gruesome reality and manifestation of Azerbaijan’s gross violations of international human rights law and international humanitarian law.

These also stand as a stark reminder of the atrocities that Azerbaijan committed two years ago in Nagorno-Karabakh. The UN Committee on the Elimination of Racial Discrimination (CERD) has recently expressed its deep concern on allegations of severe and grave human rights violations committed during 2020 hostilities, and beyond, by the Azerbaijani armed forces against Armenian prisoners of war and other protected persons, including extrajudicial killings, arbitrary detentions, torture and other ill-treatment, as well as the destruction of Armenian cultural heritage, houses, schools and other civilian facilities.

Azerbaijan blatantly violates even the precise order of the International Court of Justice for not aggravating the dispute. It brazenly ignores the ICJ’s ruling to protect Armenian detainees, to prevent anti-Armenian incitement and promotion of racial hatred, including by its officials and public institutions and to take necessary measures to prevent and punish acts of destruction of the Armenian cultural heritage.

Impunity leads to new crimes. Armenia very much hopes that the atrocities committed by Azerbaijan won’t remain unnoticed. It is our conviction that a consolidated international stance is necessary to put an end to this pattern of impunity, to protect human rights and to prevent their future violations.