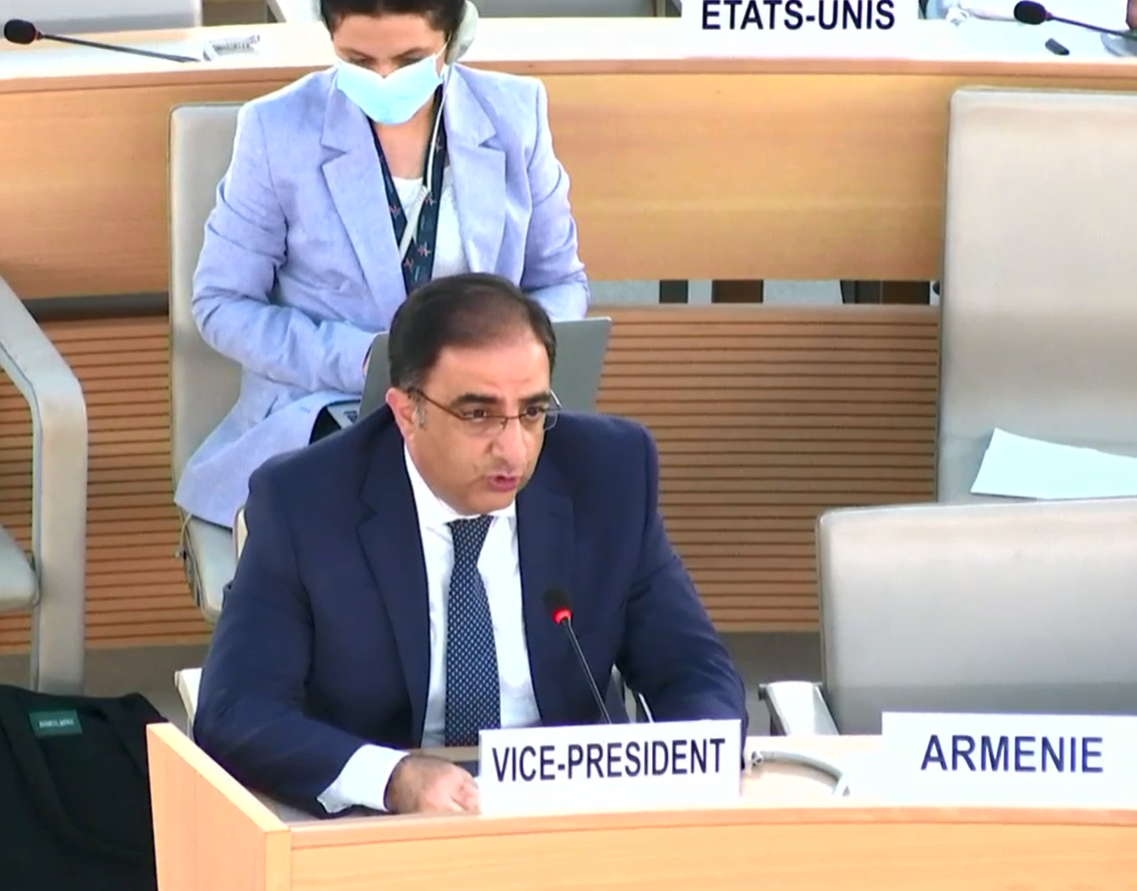 HRC 50: Interactive dialogue with the Special Rapporteur on extrajudicial, summary or arbitrary executions

Armenia thanks the Special Rapporteur for his report.

We’d like to share once again with this Council our grave concern about the lack of accountability for extrajudicial killings committed in Nagorno-Karabakh. The High Commissioner for Human Rights pointed out to the extrajudicial execution of Armenians by Azerbaijani armed forces that may amount to a war crime. The Special Procedure Mandate Holders dispatched several communications to Azerbaijan, including on extrajudicial executions of Armenians. Azerbaijan did not bother to respond to recent communications.

Since the secession of armed hostilities Azerbaijan has killed 3 and wounded 38 civilians in Nagorno-Karabakh. Numerous killings of civilian captives, including women and elderly, have never been investigated despite the evidence documented in detail by a number of international watchdogs as well as video materials circulated by the Azerbaijani servicemen themselves.

Furthermore, in November 2021 Azerbaijan declared an amnesty for all those who participated in the war, thus signaling impunity for the war crimes committed in Nagorno-Karabakh.

Possibilities for appropriate redress by the state regulated judicial system in Azerbaijan are virtually non-existent. Our question is how to secure accountability in such circumstances, and what you can do to that end?

Armenia asked for the floor to reply to the groundless accusations voiced here by Azerbaijan.

It is a well-established fact that arbitrary killings, beheadings and mutilations of Armenians are not isolated incidents. This was a policy and the way of conduct during all three wars unleashed by Azerbaijan against the people of Nagorno Karabakh. In 2016 a Yazidi-Armenian solder captured by Azerbaijani armed forces was beheaded in an ISIS style ritual killing and Azerbaijani officer posing in photos with the head received a medal from Azerbaijani authorities. Dozens of videos circulated in the social media by Azerbaijani users clearly demonstrate that perpetrators and the cheering crowd around them take sickening pride for killing Armenians in the most inhumane way.

Arbitrary killings of Armenians and attempted murders after the war have a very precise aim – to intimidate and ethnically cleanse Artsakh from its indigenous population. Azerbaijani military is specifically targeting civilians conducting post war reconstruction or agricultural works.

8 November 2021 at the intersection near the city of Shushi, a man in the Azerbaijani military uniform approached the four employees who were repairing the water pipes, and fired on them. One of the repairmen died on the spot as a result of the shooting. The three others were wounded. In October 2021, 55 years old civilian Aram Tepnants who was working with his own tractor and in his own grove and was accompanied by a peacekeeper, was fatally shot by Azerbaijani sniper.

We also highlight that Azerbaijan exploits the HRC floor to disseminate ungrounded allegations. In this context Armenia would like to remind that International Court of Justice by its order of 7 December 2021 practically rejected a number of allegations that had been put forth by Azerbaijan. The Court having considered the terms of the provisional measures requested by Azerbaijan ruled out, in particular, the false narrative that Azerbaijan has been actively promoting and pushing forward on the demining-related operations. Moreover, Armenia, as a humanitarian gesture, has handed to Azerbaijan all the maps of the minefields under its disposal.

In the same manner, Azerbaijan tends to ignore the plight of more than 1000 missing persons from Armenia and Nagorno-Karabakh. The truth is that over the years Azerbaijan rejected any cooperation in this regard.