Forum on Human Rights, Democracy and the Rule of law 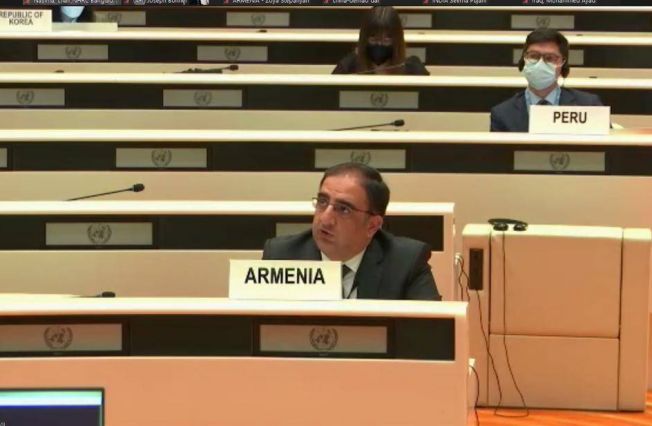 Forum on Human Rights, Democracy and the Rule of law

Third Session: “Equal access to justice for all: a necessary element of democracy, rule of law and human rights protection”

At the outset, let me extend my appreciation to the President of the HRC Ms. Nazhat Shameem Khan and High Commissioner Michelle Bachelet for their opening remarks as well as the organizers of the Third Forum on Human Rights, Democracy and the Rule of law.

We also thank our panelists for sharing incredibly rich experiences of justice practitioners and UN human rights machinery and so eloquently setting the scene for our discussions.

Indeed, the legal systems, human rights obligations and ambitions of states may vary, however, access to justice and effective redress remains among the most important prerequisites to maintain the rule of law, to ensure accountability and democratic order, as well as the public trust in public institutions and governance systems.

In Armenia, efforts to enhance access to justice has been among central goals of wide-ranging reform of judiciary. Among the measures undertaken to this end were increase in the number of judges, and simplification of certain types of proceedings, in part by the use of purely documentary procedures. A new digital system had made it possible to resolve 11.5 per cent of civil cases entirely electronically, and the case backlog had been cut by nearly 12 per cent in one year. Efforts in the area of reform of judiciary are ongoing and we appreciate close collaboration with international partners in this regard.

For more than a year we extensively discuss the immense negative impact of COVID-19 pandemic on human rights. In his recent report the Special rapporteur on independence of judges and lawyers recommended that administration of justice should be considered as essential public service during the pandemic. With deepening inequality, compromised social and economic protection systems, not only uninterrupted activities of judiciary, but also its genuine independence, impartiality and effective institutional setting for oversight and disciplinary measures are crucial for functioning and accessible system of justice.

There is no secret that some states have exploited the pandemic for tightening the grip on human rights and fundamental freedoms. It is not just the access to justice that has suffered but the justice system itself has been abused for the violation of human rights. In our region the very same corrupt justice system that has been instrumentalized to crackdown on the descending opinions and has prosecuted the human rights defenders was further abused to put forward fabricated charges against and perform mock trials of prisoners of war and civilian detainees.

Indeed, there is no room for any democratic practices, if the mechanisms, which are entitled to protect the human rights and held accountable the violators for their abuses are themselves used to severe the access to justice.

In this regard it would be interesting to know the opinion of distinguished panelists how can the UN human rights machinery react to cases, if the statements and communications of special procedure mandate holders clearly identifying such violations by particular states remain ignored and unanswered? Are there any other measures that can be applied?