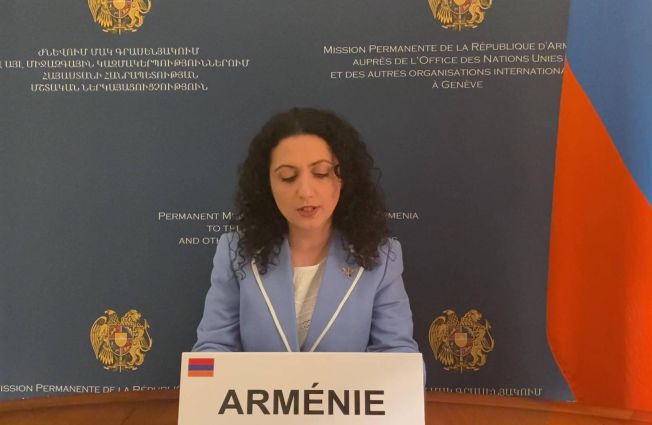 Armenia thanks the Special Rapporteur for her engagement with the Council.

Armenia is strongly convinced that patterned forms of racism, xenophobia and institutionalized hate speech are not an easily rectifiable harms.

For years Azerbaijan was inducing hatred and animosity towards Armenians, including in schools and kindergartens. Today, one year after the war of aggression against indigenous population of Artsakh/Nagorno Karabakh, racial biases of previous centuries echoing colonial narratives on Armenians, calls to violence and glorification of convicted murderers continue to dominate state propaganda in Azerbaijan.

“Infidels in black clothes,” “willy and corrupt” - this is how Armenians as a group are described in Azerbaijani school textbooks for fifth and tenth grades respectively.  “Dogs”, “mice”, “beasts” and “cancer” – those are the references to Armenian people made by Azerbaijani authorities at the highest level.

In one of the most recent incidents they called the foundations of the Parliament building of Artsakh in Shushi q/uq “devil’s nest” and ordered to destroy it. This was not just a hate towards parliamentary democracy, which is close to non-existent in Azerbaijan, but a clear incitement and instruction to violence, brutality and annihilation of Armenians and everything Armenians have built.

In a country where press and media freedoms are among the poorest in the world, racist hate speech, constant cultivation of image of eternal enemy is instrumentalised to strengthen authoritarian grasp, undermining any hopes for democratic shifts in Azerbaijan and mere possibility of dialogue between Armenians and Azerbaijanis.

Armenia asked for the floor to exercise the right of reply to the statement made by Azerbaijan. A number of international organizations have reported on the state induced anti-Armenian racism and intolerance in Azerbaijan.

The European Commission Against Racism and Intolerance stated that q/uq “Political leaders, educational institutions and media have continued using hate speech against Armenians; an entire generation of Azerbaijanis has now grown up listening to this hateful rhetoric”.

Atrocity crimes against Armenians, including beheadings, mutilations and torture were not isolated incidents during the recent war in Nagorno-Karabakh, but a common practice of Azerbaijani armed forces. Those were direct consequences of decades of hate blare and absolute dehumanization of Armenians.

The CERD committee concluded with concern that Azerbaijan q/uq “by welcoming [its] citizen … convicted of murdering an Armenian as a national hero and by pardoning and releasing that person upon transfer,… condones racial hatred and hate crimes and denies redress to victims”.

The Committee further expressed concern at the repeated and unpunished use of inflammatory language by politicians speaking about the Nagorno-Karabakh conflict and at its adverse impact on the public’s view of ethnic Armenians.

It is noteworthy that discrimination and the identity-based crimes against Armenians by Azerbaijan have been recognized by the European Court of Human Rights on two different cases: one on the brutal peacetime killing of a sleeping Armenian and another ruling on the torture and subsequent killing of an Armenian detainee in Azerbaijan.

People with Armenian last names, regardless of their citizenship cannot enter Azerbaijan, they can be detained and harassed on the border. This was attested by the UN Committee on Human Rights, which among other concerns called q/uq “to ensure that foreigners with Armenian surnames are not denied access to the country on arbitrary and discriminatory bases”.

Among other intimidation tactics, nowadays Azerbaijani authorities terrorize people of Artsakh with daily threats and hate speech. High ranking Azerbaijani officials are posting photos of Stepanakert, capital of Artsakh, deprived of electricity and water and calling it “an Armenian reservation, which will submit to Azerbaijan or will flee as they always did”, they then go on threatening people of Artsakh with cold winters without electricity and water. If this is not a racist hate speech with the unconcealed aim of ethnic cleansing, then what is it?

One cannot but notice the sharp contrast between the propaganda voiced here by the Azerbaijani delegation and the statements and most importantly the deeds of Azerbaijan.

The policy of state perpetrated propaganda of racial and ethnic based hatred towards Armenians in Azerbaijan has been once again manifested with the opening of the “Military Trophy Park” in Baku, which also featured life-size wax figures of Armenian servicemen depicted in most degrading manner. The Azerbaijani media is full of photos of children kicking and mocking the mannequins. The upbringing of children in Azerbaijan in the spirit of anti-Armenian hatred continues in the ugliest forms, but it is not the only manifestation of this racial prejudice.

In another shocking move, Azerbaijan issued a postal stamp depicting a person in medical protective cloths standing on the map and disinfecting Nagorno-Karabakh area from viruses, which is a clear reference to the ethnic cleansing of the territory from Armenians. The Universal Postal Union determined that the stamps violate its Convention and Philatelic Code of Ethics, refused to register the stamps and invited Azerbaijan to withdraw them.

The Advisory Committee of the Framework Convention for the Protection of National Minorities (ACFC) for example noted “a persistent public narrative surrounding the conflict over Nagorno-Karabakh identifying [in]variably Armenia or Armenians as ‘the enemy’ and openly promulgating hate messages.

This country has started a war of aggression against peaceful indigenous population of Artsakh, for the third time in 30 years. This fact was admitted or rather boasted in the interviews of the leadership of Azerbaijan. The policies and practices of racism and Armenophobia with their ugliest and the most dangerous manifestations are not just wide spread, they constitute main and the only ideology in a country where all conventional democratic discourses are banned.