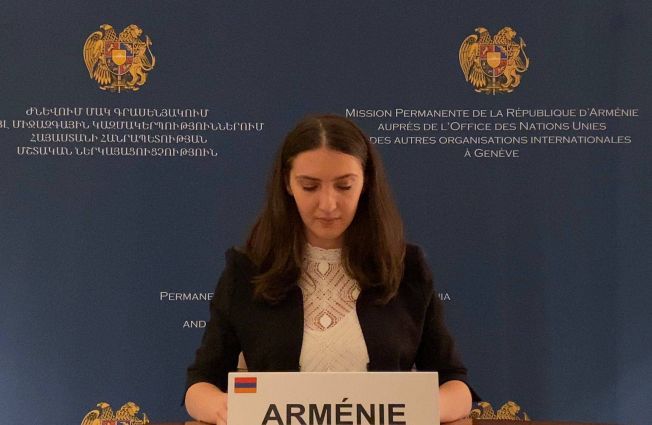 We share the view of the distinguished Special Rapporteur that the restoration of aquatic ecosystems and democratic water governance is fundamental to furthering the effective realization of the human rights to safe drinking water and sanitation. Furthermore, we appreciate his insights on ethical categorization of the water management, which should be the cornerstone of the state implementation of human rights to water and sanitation.

There are water scarcity problems in many regions of the world. From this perspective the people residing in conflict areas are among the most vulnerable communities, lacking the minimum capacity to realize their right to water and sanitation. Last year the people of Nagorno-Karabakh witnessed the horrors of war and have to live with its consequences until now. It has been more than a month that the unprecedented water shortage hit Stepanakert and other regions of Nagorno-Karabakh, which was exacerbated by the unusual drought amid the summer heat. Apart from other underlying reasons, the shortage of water is due to the increase in the city’s population, as Stepanakert is now home to a significant number of displaced people. The situation is further aggravated by the COVID-19 pandemic resulting in further violations of the rights to an adequate standard of living, health and human dignity.

Continuously abusing the agenda of the Human Rights Council by putting forward unrelated and ungrounded allegations, Azerbaijan yet again proves that it has nothing to say in the field of human rights.

No matter how much Azerbaijan avoids to speak about Human Rights, there are a number of open questions that it should answer first of all to its own population.

Azerbaijan does not want to give explanations to its own population and, hence, blames others to divert attention from its misconducts.

All of the allegations have long proved to be false, however Azerbaijan continues to repeat them. In particular, when it comes to the water pollution, the joint exercise that included Armenia, Azerbaijan, OSCE, NATO, ENVSEC came to the conclusion that despite allegations, the water flows coming down from the Armenian mountains to Azerbaijan are not polluted. In response to this conclusion Azerbaijan simply stopped any kind of cooperation in this field.

Likewise, Azerbaijan stopped any kind of cooperation when the OSCE-led environmental fact-finding mission concluded that despite Azerbaijan’s claims the summer fires in the trans-boundary zone between Nagorno-Karabakh and Azerbaijan have seasonal nature and are not a man-made phenomenon.

Azerbaijan simply rejects any kind of cooperation instead preferring to disseminate ungrounded allegations. The same is true in the case of Sarsang Reservoir. The authorities of Nagorno-Karabakh have constantly expressed their readiness to jointly use with Azerbaijan the waters of the Sarsang Reservoir, so all inhabitants of the region, whether in Nagorno-Karabakh or in Azerbaijan have access to the water and enjoy their right to water and sanitation. The joint management of the water resources of the reservoir was also encouraged by the OSCE Minsk Group Co-Chairs in their statement of May 20, 2014. By refusing the joint use of water recourses Azerbaijan proves again that its intention is to merely make a hollow propaganda even at the expense of its own population living in trans-boundary zone.

Madam Vice-President, Azerbaijan unleashed an aggression and attempted to ethnically cleanse Nagorno-Karabakh. Now it tries to dress itself as a victim by airing unfounded allegations.

Armenia strongly advocates for the resumption of the peace process for the Nagorno Karabakh conflict resolution under the auspices of the OSCE Minsk Group Co-Chairmanship and the implementation of its commitments under 10 November 2020 and 11 January 2021 trilateral statements. That`s the way to regional security, stability and promotion of human rights for the people residing in conflict areas.

Armenia would like to exercise its second right of reply in response to the statement made by Azerbaijan.

During the 44-day war unleashed by Azerbaijan, the civilian targets, including the water infrastructure in Nagorno-Karabakh were deliberately attacked by the armed forces of Azerbaijan. Additionally, given the proximity of military activities to the water sources, including the Sarsang Reservoir, and the use of white phosphorous and incendiary weapons by Azerbaijan there is a real threat of water contamination in Nagorno-Karabakh.

After signing the trilateral statement on the secession of hostilities on November 10, 2020, Azerbaijan took control of the principal water source of Nagorno-Karabakh.

Since May 2021, the Azerbaijani side has been trying to occupy new positions on the internationally recognized border with the Republic of Armenia proper, including positions near large water basins such as the Sev Lake area in the Syunik region and Verin Shorzha in the Gegharkunik region, in close proximity to Lake Sevan, posing severe challenges for the water security of the Republic of Armenia and violating the human right to safe water and sanitation.

Hence today, it is of paramount importance to ensure the water security of Armenia and Nagorno-Karabakh. There are currently no security measures implemented to prevent Azerbaijan from contaminating or restricting the water supply and jeopardizing the livelihood of the population of Nagorno-Karabakh.