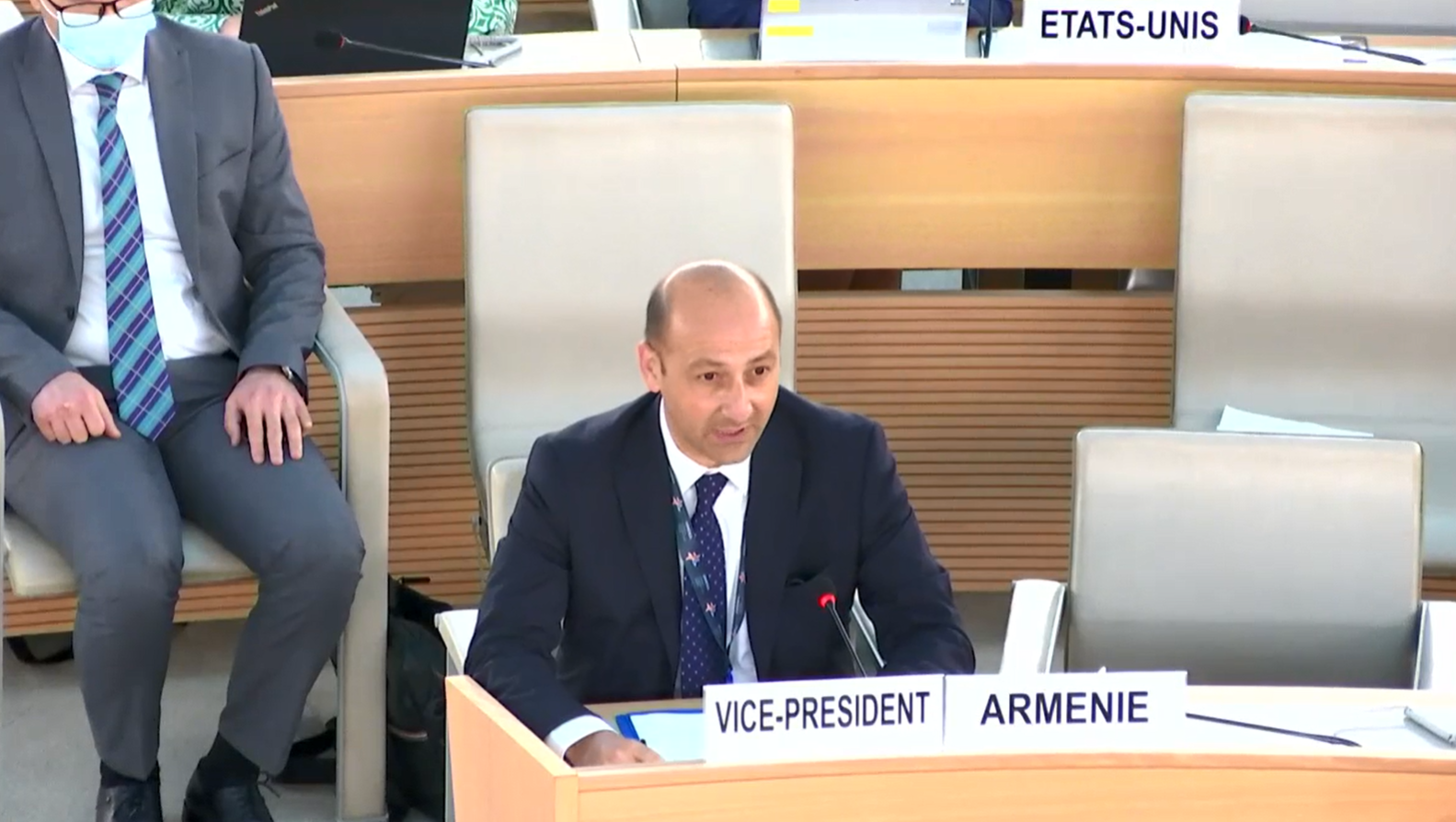 Armenia thanks Special Rapporteur for comprehensive report and presentation.

We agree that enfranchisement of IDPs is key to countering marginalization. We also noted the recommendation that electoral participation of IDPs should be in no way linked to their eligibility or registration for humanitarian assistance.

Armenia is gravely concerned that the whole people of Nagorno-Karabakh, including its substantial forcibly displaced population, have been marginalized and made inaccessible for humanitarian assistance. In this context we recall the SG’s High-Level Panel’s Report and its recommendation 9 about strengthening the quality of protection and assistance to IDPs and host communities.

It is noteworthy that it was exactly in this context that this Council and entire UN human rights machinery were explicitly referred to by the Panel. The latter concluded that in cases where humanitarian access is unduly restricted or denied, the UN and donor States should strongly advocate for access, including on behalf of NGOs. Furthermore, where unwarranted access constraints persist, the State that hinders it should be held accountable through mechanisms and tools of the UN human rights machinery.

That’s exactly about Azerbaijan, and the office of the UN SG has recognized it on the record.

Armenia requested the floor to exercise its right of reply to Azerbaijan’s statement delivered during the ID with SR for IDPs.

At the outset we would like to emphasize that there is no hierarchy of suffering, and all types of forced displacement should be dealt in an even-handed and victim-centered manner. It is our principled position that neither IDPs nor refugees should be singled out for any kind of preferential treatment, especially in the context of the same armed conflict. Furthermore, the extension of any assistance to them should in no way or shape undermine the human rights of the affected persons, their safety and dignity, or discriminate them because of their origin, language, religion, political or other opinion, national or social origin or other status.

Time and again, the Azerbaijani war of aggression made obvious the latter’s discriminatory strategies employed to displace by force indigenous Armenian population of Nagorno Karabakh. Baku takes all possible measure to legitimize the ethnic cleansing it perpetrated and to prevent the return of the forcibly displaced population to their ancestral homes. That is especially the case with the Shushi and Hadrut districts and other Nagorno Karabakh occupied areas currently controlled by the Azerbaijani forces.

It is in this context that Armenia has been expressing its grave concern over the ethno-demographic engineering activities of Azerbaijan in the ethnically cleansed Armenian towns and villages. President Aliyev himself announced new mosques to be built in such emptied ancient Armenian centers as Hadrut and Kʻarin Tak, which we view as a foreboding of the forthcoming illegal transfer and resettlement of foreign population, which is strictly prohibited under the IHL.

All efforts towards political resolution of the Nagorno Karabakh conflict should systematically address the issue of voluntary repatriation in safety and dignity of the Armenian indigenous population to their ancestral homes under the strict monitoring of the international community and specialized UN bodies, as it was envisaged by the tripartite statement of the leaders of Russia, Armenia and Azerbaijan of 9 November 2020.

Armenia exercises its second right of reply to Azerbaijan.

The Nagorno Karabakh conflict is neither resolved nor has entered its post-conflict rehabilitation stage. War crimes, ethnic cleansing, occupation, threats and aggressive posturing will never become solid foundation for a sustainable and long-lasting settlement of the conflict.

The tripartite statement of the leaders of Russia, Armenia and Azerbaijan of 9 November 2020 established the ceasefire that could have laid grounds for further work. Azerbaijan, however, continues with its unabated, appalling and pervasive anti-Armenian discriminatory practices and hate speech, denying the very right of Nagorno Karabakh to exist.

Armenia has conveyed to Azerbaijan a proposal for the framework of the agenda of comprehensive peace negotiations, but so far we have not heard any official response. At the same time, we have proposed Azerbaijan to launch consultations on the peace agreement between the Foreign Ministers. Again, we have not received any response.

Hence, the sanctimonious talks of peace that Azerbaijan pursue in the high-end salons are not matched with the corresponding appropriate actions on the ground. Azerbaijan continues to violate the letter and spirit of the international humanitarian law by keeping hostage the combatant and civilian detainees that should have unconditionally been released and repatriated long ago. Azerbaijan weaponized their suffering, unlawful and arbitrary detention to drive a hard bargain. Azerbaijan hinders access of any international organization to Nagorno Karabakh with an apparent objective to prevent international community from registering the atrocities and human rights violations it continues to commit.