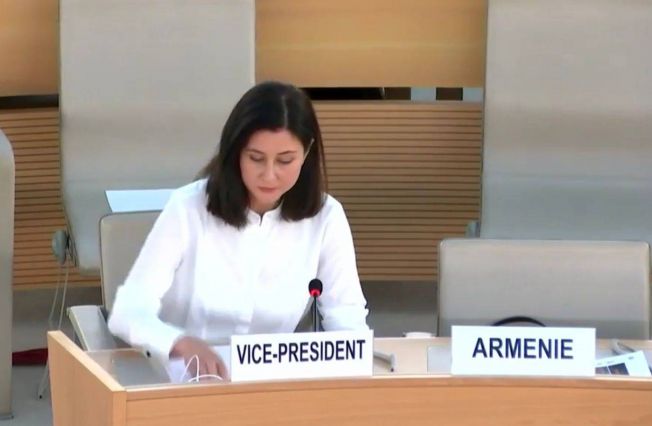 Armenia has been a traditional co-sponsor of the Resolutions on the safety of journalists and Freedom of opinion and expression. We agree that general State systems of registration or licensing of journalists are incompatible with international human rights law.

A new Media Law of Azerbaijan was adopted in December. According to independent experts, it raises serious concerns about compliance with international human rights standards. It overregulates the profession of journalism contrary to the principles of free, independent, uncensored media and grants discretionary powers to State authorities regulating the media sector, including through licensing.

We are furthermore concerned about Azerbaijan’s Government being implicated in the use of the Pegasus spyware against independent journalists in the country.

We deplore the systematic harassment of journalists and bloggers by Azerbaijan, which has not shied away from attacking them abroad. Journalist Afgan Mukhtarli was kidnapped from the country where he sought refuge, blindfolded, taken to Azerbaijan and imprisoned.

Foreign media outlets, such as Voice of America and Radio Free Europe/Radio Liberty (RFE/RL), were banned in 2009 and remained prohibited from broadcasting on FM radio frequencies.

Armenia asked for the floor to reply to the statement made by Azerbaijan during ID with Special Rapporteur on the freedom of opinion and expression.

According to the world press freedom index of the Reporters without borders (RSF) Azerbaijan ranks 154th among 180 nations. The policy of intimidation and harassment of journalists, bloggers and human rights defenders in Azerbaijan and by Azerbaijan reaches appalling levels.

In November 2020 a Baku court convicted journalist and chief editor of the online publication Azel.TV, Afgan Sadigov, of alleged extortion and sentenced him to seven years’ imprisonment. Human rights defenders considered the case to be politically motivated, as Sadigov had criticized officials in his social media posts.

In its February 2020 decision, the ECtHR ruled that Azerbaijan had wrongfully imprisoned investigative journalist Khadija Ismayilova from 2014 to 2016 to silence and punish her.

Committee to protect journalists has well documented that many independent Azerbaijani journalists are forced to work from exile and publish their work on social media.

In September 2020, the General Prosecutor's Office put a group of political exiles who criticize the country's authorities on an international wanted list.

Several days ago, on 12 June, 2022, the RSF reported that French police arrested the two suspected hit men sent to kill Mahammad Mirzali, an outspoken critic of Azerbaijan’s ruling family in his blogs.

As a refugee in France, Mr. Mirzali was the target of a vicious knife attack in the center of Nantes on 14 March 2021, which he described in a video on his release from hospital. Prior to that, several shots were fired at him just after he got into his car in Nantes in October 2020.

Mirzali’s family in Azerbaijan had also been targeted. Several intimate videos of his sister were posted online in an attempt to silence him and stones were thrown at her home shortly before the attack against Mirzali in Nantes. His father and brother-in-law were also arrested in 2017 in order to put pressure on him.

A defamation suit that a former Azerbaijani deputy economy minister brought against Mirzali was ruled as inadmissible by a French court last week.

We would like to exercise second right of reply in response to the statement delivered by Azerbaijan. Continuously abusing the agenda of the Human Rights Council by putting forward unrelated and ungrounded allegations, Azerbaijan yet again proves that it has nothing to say in the field of human rights, while its record of the respect of Human Rights continues to be appalling.

There were strong indications that the government of Azerbaijan monitors the internet communications of civil society activists. For example, activists were reported being harassed by police and forced to delete critical Facebook posts under threat of physical abuse. During the year activists were questioned, detained, and frequently sentenced to administrative detention for posting criticism of government actions and commenting on human rights abuses online. In January 2020 Azerbaijan Internet Watch reported phishing attacks against several civil society figures and an online news platform.

The OCCRP, an investigative reporting organization specializing in crime and corruption, reported that the government of Azerbaijan conducted digital surveillance on more than 1,000 telephone numbers in the country. The telephones were infected with Pegasus software. The OCCRP published a list of some of the owners of the surveilled numbers, which included Azerbaijani journalists, activists, and lawyers both in the country and abroad working on human rights issues.