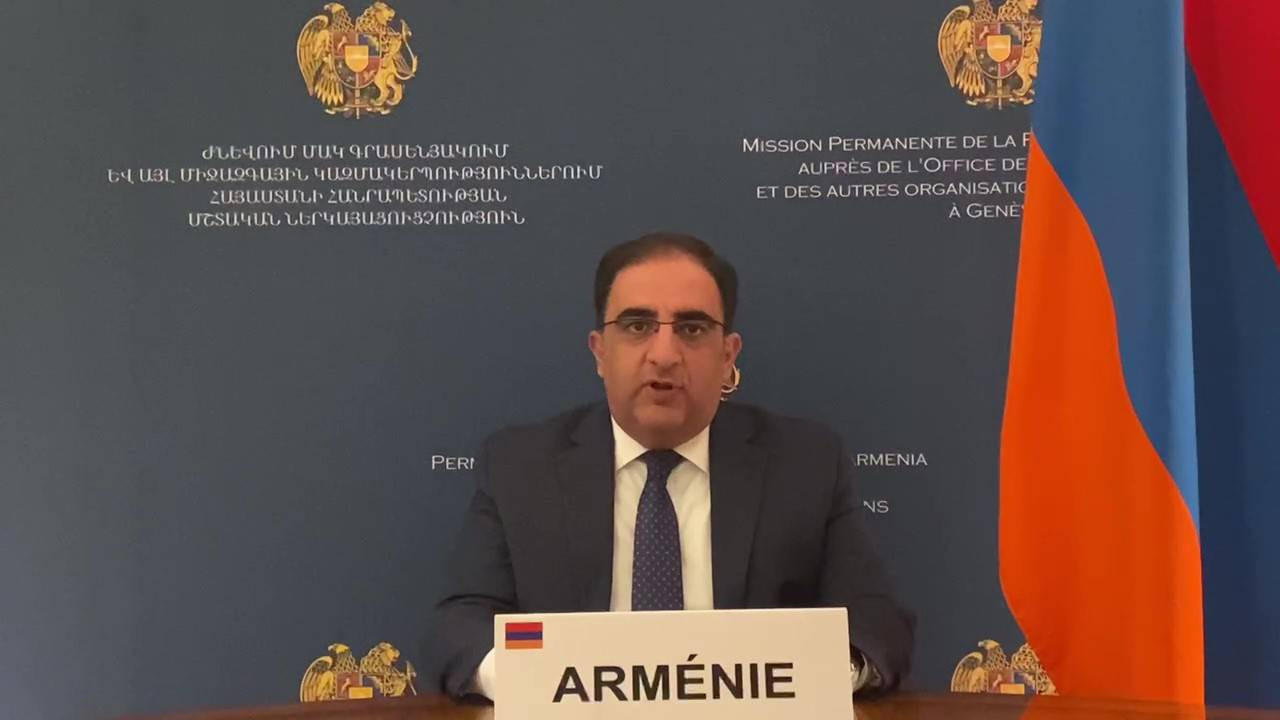 Armenia draws the attention of this esteemed Council to the violations of the human rights of the population of the Republic of Armenia living in close vicinity to the international border with Azerbaijan.

Ever since May 2021 the armed forces of Azerbaijan have been trying to occupy new military outposts and positions, encroaching on the sovereign territory of Armenia and targeting both the Armenian servicemen and civilians. Azerbaijani armed forces periodically open sporadic and indiscriminate fire in the direction of Armenian border towns and villages, resort to the cattle thief and employ other ways of intimidation, thus preventing the population from the right to freely use their pastures.

Another serious source of concern are the repeated cases of arson by the Azerbaijani armed forces, which so far crippled more than 300 hectares of pastures and 150 hectares of grasslands, seriously affecting the livelihood of the local Armenian farmers.

Since August 2021 the Azerbaijani servicemen have been regularly blocking the motorway that connects Armenia’s northern regions to the southern ones and further continues to neighboring Iran. It grossly violates the right of free movement of the civilian population, severs their access to food and medical services. This is how Azerbaijan interprets its own commitment on opening all communications in the region.

Notably, such instigations are taking place against the backdrop of extensive use of anti-Armenian hate speech, open threats to use force, justifications of the continued military provocations and incitement of territorial claims against the Republic of Armenia.

These human rights violations come to supplement the abuses that Azerbaijan perpetuates in the context of the Nagorno-Karabakh conflict, exacerbating the wounds of the recent and preceding wars.

We believe that this situation requires closer attention of this august Council, its member and observer States and the UN human rights machinery.

Statement to exercise the Right of Reply

Armenia requested the floor to exercise its right of reply to the statement of Azerbaijan.

Exactly a year ago, on this very day Azerbaijan unleashed a new war of aggression against Nagorno-Karabakh. It took lives of several thousands of people; tens of thousands got forcibly displaced. It was accompanied by gross violations of international law, including deliberate targeting of civilians and vital infrastructure. Ethnic cleansing was carried out in those parts of Nagorno-Karabakh that had fallen under the control of Azerbaijan.

Azerbaijan’s objective was and still is to deprive the people of Nagorno Karabakh (Artsakh) of the right to live free and secure in their homeland and determine their own destiny. The 44-day war was a premediated military aggression aimed at removing the Nagorno-Karabakh issue from international agenda and annihilation of the Armenian population.

The anti-Armenian hate speech and policy, threats to use force, rejection of proposals by the mediators to strengthen the ceasefire, systematic ceasefire violations, excessive accumulation of armaments and repetitive military drills in violation of international obligations, refusal to join the UN SG’s global plea for ceasefire, as well as post-war statements denying the very existence of Nagorno-Karabakh demonstrate that Azerbaijan has never been interested in a peaceful settlement of the conflict.

Azerbaijan consistently hindered the efforts of the OSCE Minsk Group Co-Chairs to establish a ceasefire, which resulted in failure of the three such attempts agreed upon the initiative of Russia, France and the United States. The trilateral ceasefire Statement of 9 November 2020 put an end to hostilities and, with the entry of the Russian peacekeepers, created conditions to ensuring the security of the civilian population of Artsakh.

Armenia is of a view that the settlement of the Nagorno-Karabakh conflict must envisage determination of its status through the realization of the people’s inalienable right to self-determination, ensuring its security, safe and dignified return of the forcibly displaced population and preservation of the Armenian cultural and religious heritage in the territories that had fallen under the Azerbaijani control.

Armenia stands for the resumption of the Nagorno-Karabakh peace process within the framework and mandate of the OSCE Minsk Group Co-Chairmanship and full implementation of trilateral ceasefire statement. Armenia further demands unconditional, unhindered and unfettered access for international humanitarian organizations and other specialized agencies to Artsakh, which should help to address the humanitarian crisis resulting from the war.