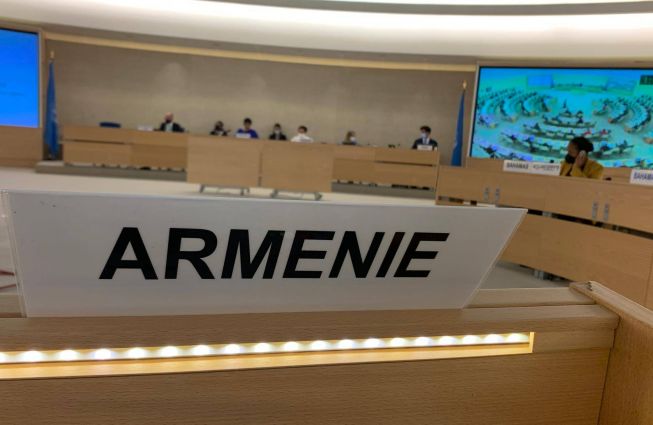 During the Session, the Permanent Mission of Armenia delivered 37 statements, outlining in particular Armenia's undertakings to fulfil its commitments in the areas of human rights and the rule of law. Armenia participated in the discussions on the women’s rights, fight against discrimination, racism, xenophobia and intolerance, extrajudicial, summary or arbitrary executions, the right to freedom of expression and assembly, the right to education, climate change, trafficking in persons, rights of migrants and IDPs, as well as deliberations on the impact of the COVID-19 pandemic.

The Republic of Armenia presented in detail and invited the attention of the UN member States and relevant structures to the consequences of aggression unleashed by Azerbaijan against Artsakh, in particular to the war crimes, grave violations of the international human rights law and international humanitarian law Azerbaijan perpetrated. Armenia informed the Council about fake allegations against and mock trials of the Armenian prisoners of war and civilian captives in Azerbaijan, destruction of the Armenian religious and cultural heritage, systematic racist propaganda by the highest authorities of Azerbaijan and its most appealing manifestations such as recently inaugurated so called “Trophy park”.

Armenia emphasized that Azerbaijan disregards the verdicts of the international courts, as well as leaves unanswered calls and specific communications and inquiries by the UN High Commissioner for Human Rights and UN HRC Special procedure mandate holders. Armenia highlighted that the inadequate international response to the belligerent policy of Azerbaijan resulted in the latter’s encroachments оn and claims over the sovereign territory of the Republic of Armenia. Apart from statements on above-mentioned issues, Permanent Mission of Armenia circulated a number of communications.

During the Interactive Dialogues with the UN Human Rights Council special procedures and investigative mechanisms, the Armenian delegation referred to the employment by Azerbaijan of the terrorist fighters and mercenaries recruited with Turkey’s support in the war against the people of Artsakh. Armenia emphasized that these facts, which were confirmed by numerous official sources, must be subject to a thorough international investigation.

During the 47th Session of the HRC Armenia co-sponsored a number of important resolutions, including the resolutions on the involvement of civil society, fight against violence against women and girls with disabilities, right to education, impact of corruption on human rights, and the protection of human rights in the context of digital technology and the Internet.

The next, 48th session of the Human Rights Council will be held from 13 September to 1 October 2021.